Daddy Long Leg? No, it's Mummy!

I wondered, for a few days, why Daddy Long Legs had fat round bodies here in Australia. I was sure I'd seen more "Canadian" looking ones, but this one, in the corner of the ceiling, looked not quite right, with a big fat round belly. Hmmm...

A few nights later I noticed it had caught a bunch of midgies (miniature flies for those who don't know what midgies are)... interesting I thought to myself... must've left the light on and there must've been a bunch of midgies around, strange, but I give it no further thought.
The next morning, whilst wearing my glasses, I marvelled once again at the amount of midgies, and, all of a sudden, noticed that this Daddy Long Leg didn't have a big fat tummy anymore... hmm, maybe it was a Mummy Long Legs... ???
INDEED IT WAS, and those were NOT midgies! 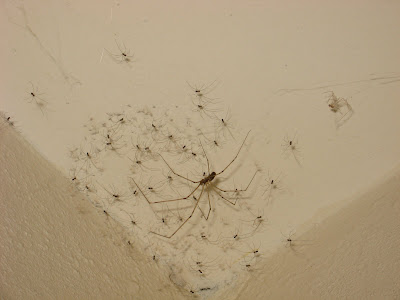 I wonder if the "dry" looking one, at the top right of the picture, is the Daddy one! Spiders can be cruel!!

On the crafty front, I've finished, yesterday, the third attempt at making polymer clay pens nice enough to give to my brother and sister for their 40th birthday (yes, they are twins). Attempt #1 became beads - I'll blog about them when the pens are done, attempt #2 were nice, but just not "nice enough for a birthday present", but I think attempt #3 will work, if I don't carbonise them in the oven.

Other than that, I just joined this Flickr group:

The fun thing about it is that it is colour based, and it's open to ALL Crafts!!! Join in!!!

A Change Was in the Air Indeed

A change was in the air indeed, little did I know about it.
Seems February brings changes in me, the new year has settled in, a birthday is coming up, and I remember 4 years ago, giving my old website a face lift right around this time, now my blog gets... a bloglift!

Now, I'm still doing maintenance, so some of my favourite links are still not on the side bar, but they will come. Baby steps!
Time was: 11:52 6 comments:

Well, dunno what's up with me, but I've been creating and I can't seem to stop (though I will have to to do laundry and the groceries, ... eventually!!!)
I got highly inspired by this blog and decided THAT was the way this tiled bracelet needed to be put together.

I made the tiles using the Krafty Lady domino set (AM245) and just love the way they look. The translucent doesn't look great in the pictures, it's a bit better in person. I got to use all sorts of odds and ends (Julie K, if you do stop by, you may recognise those charms!). I wish this was candy, because I am sure it would taste really nice!!!
I had a heck of a time with my jump rings, sometimes I think I need to make some oval ones, rather than use store bought ones (I got lazy, took me long enough putting it together without making my own jump rings, though I did make "some" of them... but yes, sometimes odd shape rings, oval or rectangular, would probably be a lot better than trying to force a round ring through the drilled holes on the side of those tiles. I still think I need to take a course in "proper" jewellery making!!!
ciao for now.

Picture for "Change is good" Ok, turns out I'd only SET my blog, and not SENT the image, just sent a test post, which I turned into my "change is good" post. Thanks for putting up with me. This is a very nice picture from a very young photographer which I discovered on Flickr. Her pictures appeal to me. She also finds great quotes to put below her images. This one was titled "let's get out of this town" but I didn't want people to think I was leaving to go anywhere, I just thought it illustrated change very well.

, a fancy photo sharing thing.
Hmm, I tried sending a picture to my blog from Flickr, but it's not quite working.
I was going to post a picture (I'm still trying) and say that I've changed the settings on my comments. I now approve all comments (so they won't appear right away) and I've done that so people who do not have a blogger account can post comments (you know, not everyone wants a blogger account). And I wanted to let people who post here (all 4 of you! LOL!) about the change because there's no huge reason behind my decision, just "freedom of speech"! :) if I do need a reason.
I'm still on a high from my clay experiments from last night, and now am looking around for things to buff!
Still need to tackle another one though, bake white clay without having it turn cream coloured (yes, check temperature, bake slightly lower... but I heard baking at lower temps might not "bake" as well, though it does work on my home oven!)

Tis all, now to find that elusive photo which was sent here.
Time was: 08:57 1 comment:

Yay! this was so much fun to make!!!! An Amphora Necklace!! 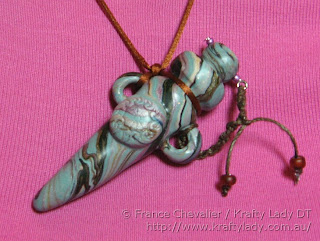 With a tutorial from Tina at beadcomber.etsy.com, scrap clay, a mould by Krafty Lady (AM330) and a whole lot of patience!!
I also used a buffing wheel made today, as per the instructions on Desiree's Site, wahoo! What a shine!!! I'm going to make a second one soon, I can just feel it!!! I did however supaglued/crazy glued the discs to each other and pierced a small hole in the middle so my mandrel could securely screw in. I saw that tip in another tutorial, but watch out to not glue your fingers!

I've also made those when I was in my Faux Bone Craze (I still am, I just ran out of the mix. Will have to make more) 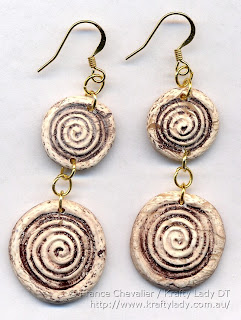 I've been in a very creative mood lately and tried to make a bit of time to make stuff!!!

late addition: my other Faux Bone can be seen here