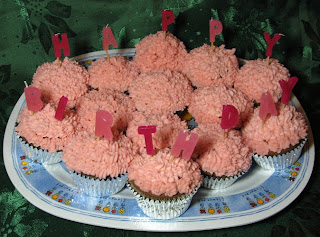 After trying many different cake recipes during the holidays, to the delight of hubby and progeny (or should I say progenies?), we settled on Fudge Cake cupcakes and Decorator Frosting, from Allrecipes.com for the party.

I really had my heart set on Cupcake Cones, but my oven being so temperamental, the edges of the cones would burn on some, not on others, etc... quite the experiments, and some recipes don't "dome" as well as others.

So with the help of the recipes above, and a gizmo I had picked up from Multix at Woolies (I think?!) I set off to make little cupcakes...

I found the candles at IGA.

The great thing about this icing is that unless it's left in a hot car for too long, it remains pretty stiff, and does not stick to plastic wrap, so it's perfect for cakes you have to bring somewhere!!

My photos did make it on the front page of Allrecipes as 'newly added photos', probably because I picked Canada as my location - if I had USA they'd be drowned by other "new photos". I had picked Australia before as my location, but it would give me measurements in grams, and I am very much used to cups, if I have the choice I prefer cups -- also the fact that I don't have a kitchen scale for food doesn't help!; and if I pick Australia now it goes to the new site, for which I did register, but which seems much more demanding on my computer, for some reason, I'll have to email them about that!!! See the *** below.

The cupcake photos are mine, and the iced ones are on there twice, once submitted for the frosting page, and once for the cake page, haven't yet found a way around submitting the same pic twice, I'd rather have submitted one pic for the two recipes, since it was the same pic? Dunno... sometimes things make no sense to me :) 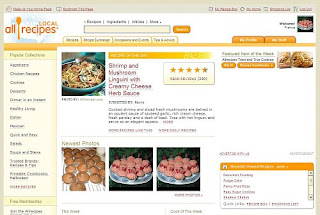 CARS
Sometimes you wonder why things happen the way they do... I guess in the end there's always an answer to be found, but we don't always find it... Yesterday, on our way to the party (which we ended up having at Tropical Twist) we're about to turn the corner, just very near our house, and our car died! AGAIN! (though now we think we have a better idea of what's wrong with it, which is not what we previously thought was wrong, so maybe it can get fixed for good this time. Let's hope!!). Luckily my phone was charged up, and I called one of the other mums and asked her if she could come rescue me and the birthday girls! On the way back we got a ride with a different mum (the first mum had committed to bring other kids back home) and when we got to our house, her daughter wanted to come for a play, and the three girls had a wonderful time, so maybe that's why our car broke down, so that little Miss M (I avoid putting other kids's names on my blog) could come have a play with my two little Misses...


Still, we really could have done with a working car this weekend :) if only to finish the birthday present shopping! Hmmm, maybe we'll need a second car?! :)

CRAFTING
Anyway, and nope, haven't touched stamping or polymer clay since July... still... and won't today as I have to get yet another cake ready for the actual day :)
hmmm, which one to make..... Maybe cake making can be considered "crafty"?

COMPLAINTS
Oh, yeah, the *** above.... well, if you're not happy about something, you should politely let someone know... A couple of weeks ago we went to Maccas (yes, even good parents sometimes need Maccas!) and 1) they were out of the Littlest Pet Shop toys, disappointment but we can survive 2) one of our nugget Happy Meal was missing a nugget (well, that's annoying but we can survive), and 3) we asked for BBQ sauce (though seeing what that sauce did to some coins I had in my bag one time when such a BBQ container decided to leak in my bag, and yes, good parents might take their kids to maccas twice!!) I wonder why I let the girls eat that stuff, but anyway, we asked for BBQ and we got Sweet and Sour which the Happy Meal eaters in this house don't like. Ok, we could survive, but three "not too good" things on the one meal sort of got me annoyed... so I wrote a letter, and in return we have received two free happy meals (hmmm, am I still a good parent if I take my kids to maccas 3 times? 4? )

And another similar thing, I bought some dark choc chips (see above, been trying a lot of recipes lately) and when I poured them in, there were dark choc chips, but also milk choc chips... now, if I wanted milk choc chips, I would have bought milk choc chips.... so a little email went to Cadbury telling them about my experience (well, yes, chocolate is chocolate but the point is that I expect to receive what I pay for, not a substitute, specially without warning -- that goes for the sauce at maccas too!) and I was told I would hear back from them via mail, so I'm waiting :) Free chocolate for a year? probably not, but a coupon for a replacement pack would probably be fair compensation for my distress! LOL!

I hope you all had wonderful school holidays, I played Working Mum while DH played Stay at Home Mum. Oh well, the progeny is kept happy, that's all that matters!

Mmmmmm, I can't get over how gorgeous those cupcakes look. Makes me want to go find a bucket of icing and eat it, lol!

You're a good mom!

Great birthday cake idea France - no knife required! I don't know why, but somehow I always end up with the cake cutting duties - at home, at work, at friends.... anyone would think I was good at it or something! But this idea just takes the cake!

Hi France! I followed a link from Pauline Laing's blog and found you ... lovely to "see" you're still around.

Did you know your yummy looking cupcakes are on the Australian home page of allrecipes as well?

I love that site.

So France are you going to bring some of your experiments to SAJ's? I hope the girls had a lovely time at TT and appreciated all the hard work you went to with the cakes. They look great BTW.

Thanks Julie, and it's ok if you missed the voting, I got an email from AllRecipes Australia and they want me to post my recipe on the site to go with my pic (and with my tweaks!)

Thanks Myléne, it does make things easy at a party (no plates for one!).

Hi Chris! Great to see you!! I emailed you my update. Neato!

Kylie, now there's an idea, I'm sure Cordelia would be only too happy to help me make them again! Now, what colour icing?? Pink, yellow, blue, or a bit of everything? We had pink and orange on their actual birthday!!