Well, things are a bit better than yesterday! Though, I finally get a moment to bake some things I made about two weeks ago (polymer clay) and have not yet been able to find the time to bake them, and .... well, I forgot to put my thermometer's alarm ON, so the temperature rose, and rose, until my daughter comes and says "mummy, the oven is going to 135, 136 and keeps going up" well, by the time I get there, about 15.7 seconds later, there's smoke coming out of the oven!!! and, well, my items have burned! *sigh*
It's ok though, a bit of a bummer as I waited SO long and now, blerch! But I'll be able to recreate them i think, though one of my blends was quite nice, and well, probably I won't be able to redo that one, but it has to happen once in a while. I guess....


Some of you who aren't on the local stamping list will get a giggle from this story:
Many of you know that we have been car-free since I moved here (August 1998). I got my license (in Canada) when I turned 16, been driving ever since, well until 1998. In the past months, things have changed, and we now have wheels... but I haven't driven in 9 years, and never driven on the WRONG side of the road before (well, once, but that's a story I prefer not remembering, it was dark, in some NDG little winding road, and I didn't know it was a One Way street, but no harm done, there was no one else around!!!), I was quite relieved, a while back, when I realised that not everything was completely reversed, that the clutch-brake-gas pedals were in the same position!!! *phew*!!!
Anyway, a couple weeks ago I had my first "getting-back-into-driving lesson"!!
other than slamming my right hand in the door a few times trying to change gears, which are on the left now, and constantly turning on the wipers instead of signalling which way I was turning (again, reversed), it went pretty well... I've had another lesson since, it's been hard to find time these days. But it's going pretty well, I also think having the hand break on the left makes me forget about it, you know, nothing to do with the right hand... oops! hehehe!!!

that same weekend I had another first. I sold my first item on Etsy! Sold it on 31 May, but then it was the weekend, then it was Foundation day, then on Tuesday I was home bound with "girls with flus" so on Wednesday the parcel left... but I've yet to hear if it arrived, and I'm biting my nails... I'm being patient, I know mail is slow, and the buyer hasn't contacted me yet but yikes, it's nerve wracking!!! Every day I check to see if they left feedback, I'm neurotic! :)

hmmm, don't have any artwork to post, really... haven't done much, ah, heck. I'll go scan the ATC I finished yesterday with a background which Ann G put in the "free to a good home" bin at our stamping club. I'll go do that NOW! :) 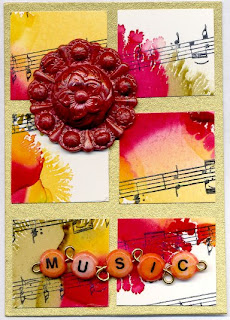 ah, so bad that happened to your creations. I love what you do in polymer clay <3

And I trust your buyer will leave you feedback soon. It's the first of many to come, lol! :D

Hi Estivalia :)
well, I'll survive *grin*
I think I can salvage some with Rub'n'Buff or the like, or maybe Pearl Ex!!! I'm off to see YOUR blog!!!

What a lovely little ATC - I like the challenge of making something using someone else's background.

LOL, just re-read this post and the driving story cracks me up - I'm living in the USA so currently driving on the 'wrong' side of the road, when I come home to WA I'm often found turning corners with the windscreen wipers going :)