Yes, I should think of a better title than SOAP!

My soap buddy Gabbie has been putting me to shame, she started soaping a week before me and has already made over 30 batches!!!

Ok, since my last lot of pictures, this is what I've been up to...
I did make my tooth soap, and I've even been using it, that soon after making it, and it's just simply wonderful. You have to try to not put your tongue on it too much as it does taste soapy, but I like it so much better than my favourite toothpaste!!! Then after that I made a great Coconut Oil soap... 100% coconut oil, with a twist... Thanks to my new friend Justine who inspired someone by the name of Irish Lass, who has been singing the praise of Justine's idea!
This is my rendition of it. Yes, I'm still trying that elusive swirl! Oh, and I used a rubber stamp to decorate this bar!!! 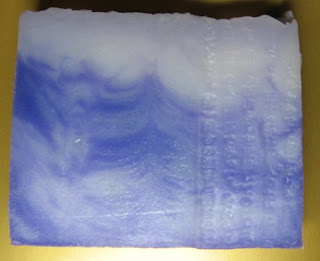 I then revisited my first batch, making it a bit different, with no oatmeal (though I do love some oats in my soap!!) - I attempted a 2 colour ultramarine swirl in that one, but something didn't go quite right! Though it looks like it'll be a nice soap if not a pretty one! 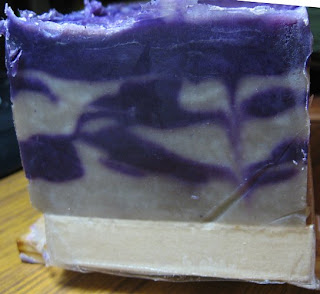 And then came the disaster!!!!!!!
It all started with my coconut soap (which I now call Extra Cocolicious)... all went fairly well though I didn't really manage a swirl this time either (the elusive swirl!)... and I thought I'd gotten a really nice gel:

When I unmoulded it, it looked not quite completely cooled down, but still nice enough (and definitely NOT displaying a very nice swirl, but I can live with that)

but when I cut my first slice, oil came oozing out!!! You can see the pool of oil (upper right) above the soap

So I turned to the savvy soapers at The Dish and it turns out I soaped way too hot (it was HOT indeed on Sunday!!!) I forgot to cool my water, my oils were too hot... just one silly little mistake after another which yielded a mistake larger than the sum of its part!!!
So I thought, nothing to lose, let's try a rebatch!!!
That's when you take your botched soap (though some people choose to do this with good soap!) and you cut it in slivers:

and you put it in a crock pot (which ended up in the oven as the crock pot temperature wasn't high enough on LOW and I was too scared to put it on HIGH!

and you melt it in the oven until it ressembles goop!!!
You then slop it in a mould, and well, to my surprise, the resulting soap is not bad! A bit grainy, a bit ugly at the top, but I adore the scent I used (Ancient Sedonia and Vanilla Select, from Bramble Berry, which I get via AussieSoapSupplies!)....

But tonight, I think the Soap Goddess is with me as I made a Goat Milk soap -- they are notoriously difficult, from what I read, as milk makes soap overheat but I figured, after the disaster of Sunday, let's jump in with both feet... and so far, so good!!! The soap even looks really nice!!! I scented it mildly with some lavender oil, took my time, and so far, so good, but it's in the fridge to prevent gel!
Photos will have to be shown tomorrow...

and on a completely different note...

now, why is my banana sad? 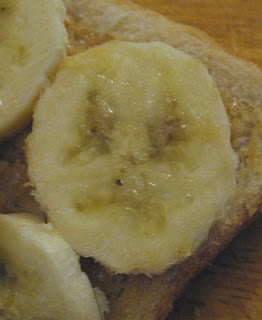 can you see the face ?

OH!! GIVEAWAY UPDATE!!! well, I tried my coffee soap, and it's slightly exfoliant, and I am waiting for a couple more soaps to come to maturity so the winner (when I draw the name) will have a bit of a choice, as I'm not sure everyone will like soap with scratchy coffee in it :) it's not scratchy really but you can definitely feel it... so if you haven't entered, please do here.
Time was: 20:41

Very nice!!! I have made some really awesome rebatched soaps, you'll be amazed at how nice it feels when you use it! I absolutely love the pic of your first swirly attempt. Its so pretty!

That banana looked like it needed to find a good home... hope you gave it one :)

Thanks for mentioning me in your blog! Woohoo I'm famous ;) lol

So sad about the banana - I put a happy one on MY blog though...

Heather!!! I don't do much, just soap, nothing more... but I'm happy to be part of a mutual-admiration society with you, cos YOU amaze ME! LOL!

Hiya Justine, you ARE famous!!!

Pauline, off to see your banana!

Wow all coconut soap!fabulous France, I want to try some with Virgin Coconut Oil, which I bought at the health food shop. It took me a few goes to make goat milk soap and now I am happy with the results, and it is so lovely to wash with creamy and so so soft. I superfat it at 8% to keep it as a luxury soap. I haven't tried hot process yet, but I want to make some chunky soap balls! BTW I thought I was good making 30 batches in 4mths! but in one week!!?? wow thats dedication... your nextmove, lotions?

No no no... Gabbie started soaping one week before me, she's not been soaping for one week!!! So that means about 7 weeks, but yeah, 30+ batches in 7 weeks is a whole lotta soap!!! I'm on my 11th batch in 6 weeks, I think that's pretty good too!!!
Next, yes, would love to try a lotion, been enjoying your samples!

The soap looks fantastic agian, but it was the banana which cracked me up :)