Ann has a fun giveaway! 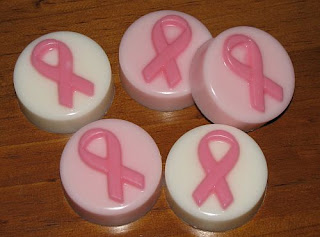 My friend Ann has been really busy raising funds for the Breast Cancer Foundation and is having a giveaway of her fine soaps!
You have to guess the weight of the 5 soaps, and you will win them if you are the closest to the weight. You can go to her Made It shop and find out the range of the weight of each soap and venture a guess.

As for me, I've been making quite a bit of soap but I have no time to blog about it as my Mum is visiting us and I'd rather spend time with her than on the computer, so forgive me and when she's gone and I'm sad and blue I'll come forget my sorrows by telling you about my suds!
Time was: 19:03 2 comments:

Soap of late (while I'm on hold on the phone with the ATO!)

RHUBARB AL FRESCO
Rhubarb al Fresco is a great scent, but I think I'd be better off using it in shampoo/conditioners/melt and pour...

My first time with Rhubarb al Fresco in CP went quite well but turned an awful yellow colour. It also traced very quickly and I had to slop it in the moulds quick! Only later did I realise it was a fast-tracer and super-heater (sometimes I think of looking up that information, sometimes I don't)! The colour was awful, I stuffed it in the cupboard and a month later I had a fairly nice soap, and it smelled wonderful, no ash but a few bubbles as it was thick when poured (check pics in this blog post, the 2nd set of dragons to see the change in colour). Then I've remade it, and it looked fine, I only used the whisk, no stick blender but as you can see from pics below, it's got some brown spots (probably FO or something, not sure, not zappy either - but ugly!!) 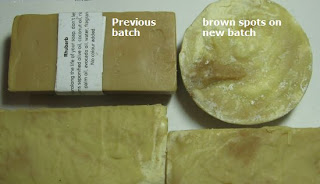 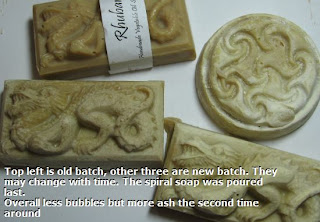 I'm rather hoping the brown spots are the FO which has already discoloured, as the colour ressembles the first batch I made, but I really thought I had blended in the FO very well... I can only wait and hope that when the curing period is over, my ugly duckling will be a beautiful soap! (well, it's fun to believe in fairy tales!)

VANILLA SOAP FAILURE AND SUCCESS
Then there's my vanilla soap experiments! Yikes, a tested recipe which worked really well as a log didn't go so well in my dragon mould... I think my problem is that I unmoulded it too early, it ashed like mad! -- my coffee and mango lassi soaps are made with that recipe, and they are beautiful soaps. The coffee soap has even darkened a bit more since the picture on that post was taken.

This time it really ashed, as you can see from this picture: 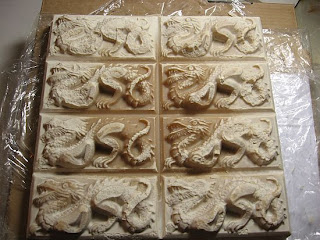 I even lost chunks of the dragon, though this might have to do with the fact that I tried to unmould too quickly, but I didn't want a repeat scenario from when the soap would NOT come out of the mould even after a month of waiting! But not a single dragon was unharmed, they were all missing chunks!! I'm thinking too that perhaps cocoa butter in moulds is not a good combination, I seem to remember the "stay in the mould" soap was also made with cocoa butter.

The baubles I made at the same time also ashed: 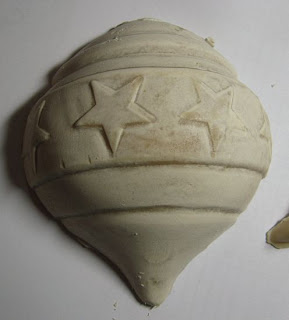 but the fish (below), which I made in a Ikea ice mould, and which I didn't unmould until a few days later seem to not have ashed So I'm still not sure what causes ash, why it is some people never get it, but I'm looking for ideas of what to do with this soap, rebatch? chunk? grate?

So as this Vanilla Dragon soap was a special favour for a friend of mine, I had to make some more. Her son doesn't like soaps that smell too strong and he also loves dragons, so I'm making her a slab for her to give him at Chrismas (she's a mum from school who helps me out often, like, oh, let's say, when my car refuses to start!!! LOL!!!) so this is the 2nd attempt at this dragon slab: 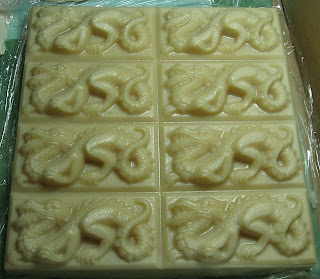 This time it's curing very nicely, no ash (different recipe) and also turning a beautiful brown with time. Very very pleased with this batch. 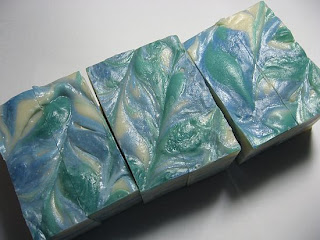 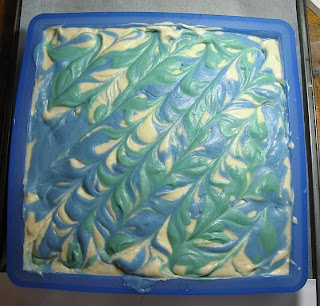 This is a soap I made using my new colours (from Heirloom Body Care) and some fragrance I was lucky enough to get from Erin when she had a de-stashing moment. I had mica (Aussie Pure Glow) in there, but I have had no luck at all with mica. I'm starting to think too that maybe that mica is not meant to be used that way but just used in make up (oh how I'd love to formulate my own mineral foundation!!!). I was going to use the mica in the swirls but it became very-traced VERY quickly so I poured it with the rest of the soap and mixed a bit with the whisk... I am now, two days later, noticing some white flecks in the soap, which is preplexing as I didn't use any titanium dioxide, I gather they could be the mica (could very well be), but they aren't shiny and they aren't zappy either! Pictures will have to follow in a few days, in case anyone has comments or suggestions about what the white flecks are.

OAT MILK, HONEY and CALENDULA
So it hasn't been a great soaping week for me, though my calendula orange and yellow soap made with oat milk did make me happy 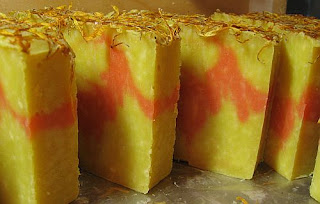 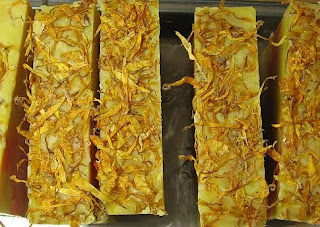 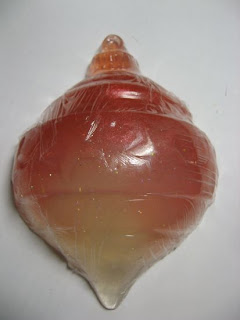 using the double pour method. I'm quite taken by that method. I also tried to make baubles with a strip of a different colour in the middle, it worked well, but not well enough (need to experiment again with that one). So those baubles not making me happy, I cut them up, and put anything with a bit of colour in the colour pot, and the clear bits in the clear pot, tried to re-melt to do another double pour, and I just could not get the soap to stay at the proper temperature so I put everything in a pot, added some more Merlot Mica (ASS) and poured straight baubles, they are quite nice, translucent, and the Pure Glow Mica (ASS) and the soap glitter really add dimension to the glycerine base. 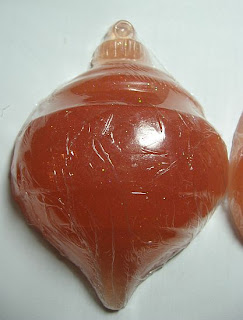 I got the base from Range and I like it quite a bit, I have a feeling it doesn't sweat (testing a bar right now) and I think the problems I had with the 2nd double pour could be because I lost some humidity in the soap reheating it (or it was too cold in the house!). I got some more of that base today, as well as a large quantity of various oils to make more soap.


ATO
for those who wonder about my ATO comment, well, I edited most of this post (and added the title) during my 45 minute wait at the ATO's help line, to get a different BAS form for my hubby's business, only to be told that I wasn't authorised to request that on his behalf and could he please call back later! Well, at least I got a blog post out of it!

If you've read all this, please thank yourself from me!!