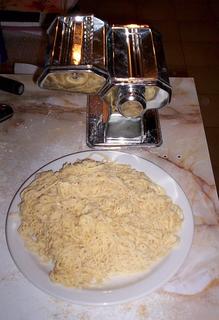 Well, not really pizzas, but definitely pies, and soups, and yes, NOODLES!!

We're in the midst of Winter Holidays here in Western Australia, and I've been cooking a bit. It's pretty cold so I've been making soups. A whole bunch of different ones, and we eat half, and the other half goes in the freezer for when school starts or when neither of us feels like cooking (well, DH and I are doing the soup eating, the girls aren't big on those yet). The girls helped me and we made homemade noodles yesterday, it was great. I currently have a pasta maker on loan to play with polymer clay, but it's never been used with polymer, so I used it for pasta. Not sure it'll see polymer while I'm in possession of it!! The whole family ate the noodles!!

but really, I think we need a better oven :)
more later... if/when I get 'roundtoit Google Search Result
Time was: 16:13

Email ThisBlogThis!Share to TwitterShare to FacebookShare to Pinterest
Tags: food