Last week was a huge week with parent/teacher night, excursions and incursions and National Book Week at our primary school... On Wednesday the children got to go to school dressed up as characters from books. Most chose their favourite character, here, one chose to put on the Princess Leia costume 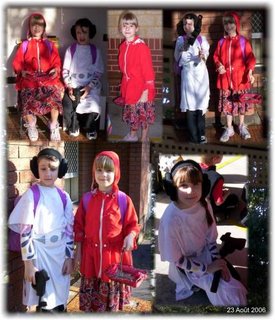 I'd made for the girls for a Star Wars (boy's) party they went to last April, the other looked at a story book and decided on "Little Riding Hood". My only "rule" was: if you can find something to be your costume, then that's fine! I had only found out at 4pm that the next day was Book Week Dressup Day (must've missed it in the newsletter). So here are the results of our dress up bag. The kids all paraded in their costumes, and f unnily enough, the pre-primaires had a few children dressed up, then the Y1-Y3 were good, many kids dressed up, but in the 4-7, you could tell which year was up becuase the older they get, the fewere kids were dressed up with only one girl from teh 6-7 class in costume!! Shame, that's one day those kids don't have to wear their school uniforms! Not that there's anything wrong with the uniforms, but you'd think they'd want to dress up as Edward Scissorhand or something (yeah, I know, ES is a movie but someone had to write the story?)
Enjoy! (oh yes, the date is in French as I sent this to my Mum!)
Time was: 14:28

Very cute! Your girls look like they enjoyed themselves. Em went as Tinkerbell, as that's the only costume (fairy outfit) we had in her wardrobe. We put bells in her hair for added affect. Gotta love those dress up days, as soon they'll think it's "not cool" to go dressed up. Have a great day.

The girls are looking so cute!

Hi Natalie!
I saw your pic on your blog Natalie, cute too! Great idea the bells!

Salut France!
I was mucking about on the web and stumbled across your blog. Once again it's been far too long since we've been in touch. Your girls are beautiful...
My wife and I are moving back to Montreal after a 3 year stint in Gatineau (across from Ottawa). It's turning into a nightmare as no-one seems to want to buy our house.
On the plus side, it looks like I'm going to be a daddy by the time that spring rolls around!! We're very excited, but really want to get our housing situation sorted out. We're looking in the West Island - maybe Beaconsfield or Pointe-Claire.

Ohmygoodness Rob! Congratulations!!! I'm still at the same email address...
So cool to have you find me again.