Last weekend was another birthday weekend, and we went to a party, and we had to bring a present, and this time it was a BOY having a party... can't make him lip balm and a cute bag.... and I didn't have time to think of a "boy bag"... the invitation said "anything pokemon or $5 for his bank account", hmmm, I had NO time to go shopping (heck, I don't even have time to blog or make soap lately!)... so I thought, and I thought, and we borrowed some image from the web (now I do hope this won't get me in trouble, and if it does, I'll change the picture), made a card, and I was thinking of making a little money soap like on The Soap Queen's Blog, but instead I sort of improvised on the theme... I took 6 x $2 coins (present comes from two children so I figured $12 was good, and went better with my idea than paper money). I washed the coins with soap and then sprayed them with rubbing alcohol to kill buggies.
and I made this: 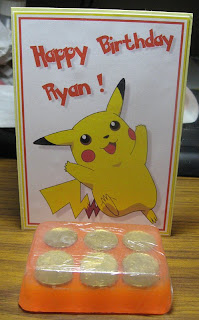 I should have taken a picture without the glad wrap (would you know it, my little cello bags were nowhere to be found on Sunday morning!!!), but you get the idea. Well, Ryan loved his present, told his mum it was one of the best presents ever! He apparently had a super long shower that night, and also wanted to wash his little sister and made sure Mum and Dad also used his soap. My two and I were in stitches listening to the mum telling us the story, and Ryan was there too and agreeing with everything Mum was saying!!! So much fun!!

Today when I saw Ryan at school he came up to me and said "I got two coins out!!!"... apparently another very long bath last night... Quick and fun present, and useful too, I had no idea it would be received with so much enthusiasm, it just made us so happy!!! And so much better than money in an envelope!!!

I remember when I was younger (all those years ago) there were cards with little slots for coins, so that they would be either the wheels of the car, or some apples in a tree, and there were slots, and sometimes just openings to squeeze the coins in, in different shapes... haven't seen any in a while (hmmm, could be because I haven't shopped for cards in a while)....

Speaking of cards I got a fantabulous one from my mum today (early birthday card, sent from Paris no less, mum finally got to set foot in Europe to visit my cousin and research and climb up our family tree!), anyway, said card was actually bought in Montréal (isn't cute, mum sent her daughter France a card, from France!) and was made by a cousin of mine, Marianne Chevalier... and I'll show you a picture, but if you want to see some of her really interesting weaving style you can visit her site although the cards aren't on there. I'll post a picture of my card eventually, and also post a picture of a lovely painting I received a couple of years ago for my bday and I have never posted to this blog... à suivre as they say in Paris!!!
Time was: 20:32

What a fabulous and fun present!
At first I thought it was a brick of Lego soap (very cute I thought!) before reading on to see they were actually coins inside the soap.... Just too clever France!!

Cute idea!! And I loved perusing your cousin's site--nice to read something in French! =)

Best soap present ever (for a little boy, that is!). You were clever to put all that together!

Well, I think the best soap for a boy present ever had a wee little crab inside, but this one is cool too. I think we'll have to take up the pour/cast soap hobby. Jaylene has fallen into a birthday party circut and I'm running out of ideas! You rock.

oh France, l LOVE the soap!!! I sold a few of my fish in a bag soaps at the market and they look so cute, but this is the best soap ever, l should get you to make some for my kids because they never use soap LOL.