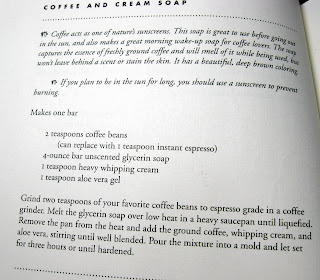 I'm using Picasa to find some pictures I can't locate on my HDD (don't you just hate when that happens?), and I came across this picture I had taken from a book for a recipe I really wanted to try (beats writing it down and realising I can't read my handwriting, which used to be quite OK, but not so much since I'm using computers so much... which could bring up a whole 'nother topic where a friend told me they don't teach cursive writing, aka running writing, in schools anymore as kids don't write anymore.... that is just insane... but going back to my soap.....) and I made it, and it was gorgeous, and a few weeks later, the girls are washing their hands and one comes to me and says "mummy, i just washed my hands and they smell like vomit", so I figure she's exaggerating again, doesn't like the new FO I used, or what not (kids have the funniest comments sometimes)... so she makes me smell her hands, and it was FOUL! her hands DID smell like some sour milk.... and well, I went and smelled my beautiful looking soap (as per the recipe in the picture to the left) and it was absolutely dis-gus-ting..... I guess the moral of the story is beware what food stuff you put in MP soap as it's not the same as CP soap and can go off...
Now if anyone knows of a way my soap wouldn't have gone rancid with the whipping cream, please enlighten me.

Anyway, it's not just because a book was written and published that what's in it is has been tried and tested. I remember people on a soap forum mentioning a book where the person is showing new soapers how to make soap and tells them to pour the water into the lye.... That is dangerous beyond words. How books like that get published is just negligent.

My 2 cents while I go back to look for the darned pics I lost ;)

Cheers! (below is the pic of the lovely "Tiramisu" soap I'd made with the recipe with cream... looked nice!)
note: I should probably add that this was one of the first soaps I made, about a year and a half ago... coming across the picture reminded me of the story... so I thought I'd put out a little reminder/heads up. 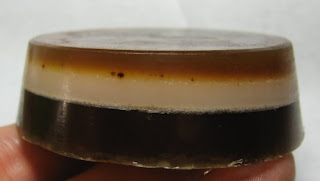 Aw, what a disappointment!

I don't think there's any way you could have used fresh cream in MP and not have it go rancid the way you can with CP. maybe try using milk powder instead?

Ooh Erin, love your icon! Yep, I think I'll give up on milk stuff in MP soap! I'll use a fragrance and titanium dioxide instead ;)