what's keeping me busy this weekend

Other than the farting around hubby and I have had to do with his car, and with his work, etc... this blog post is what I'm doing to keep my sanity this weekend...

BUT FIRST, this is what happened to hubby's spare tyre a while back (now before you think I can't spell, that's how tire is spelled in Australia, and I always think Canadian Tyre wouldn't have looked strange. This was part of our weekend as well... 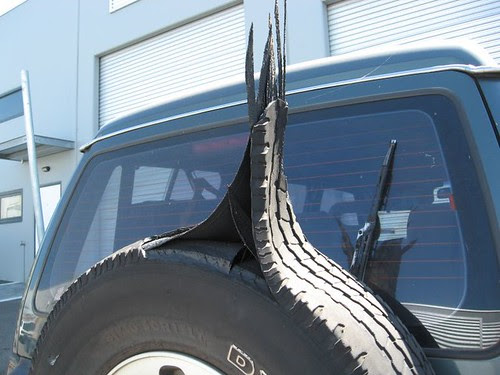 The guy at the tyre shop where we went this morning says in hot weather (it happened on one of the heat record days we've had this Summer) he sees a couple such explosions every week from 4WD type cars! Hmmm, interesting.

Anyway, hubby thought his front wheels needed aligning, so the car is at the tyre shop, and lo and behold, one of the front tires is causing the wobbling, and the cause of the wobbling is the same thing (for lack of the technical term because I cannot remember it) that caused the spare tyre to blow up... and would have done the same in a matter of ..... days!!!!! Imagine that!

So we may have saved hubby's life by getting it fixed sooner rather than too-late!!!!

But the fact that his car is unsafe to drive is causing a bunch of scheduling conflicts (oh the busy life we lead when we have children!), which I won't bore you with... some days/weeks seem like nothing will go quite right. What I wouldn't give for a week to be so perfect that it would be boring!!!!! Not just with hubby and the cars, but with all the melo dramas caused by life in general!!

Anyway, after reading SoapyLove's Debbie's tutorial for cup cake soaps, seeing the video (below)by the Soap Queen was very exciting, and I'm in the midst of trying this project:

How to make Soap Cupcakes with Whipped Frosting from Soap Queen on Vimeo.
The cupcake portions are setting right now. Can't wait to try the whipped soap for the frosting! Anne-Marie told me (via her Soap Queen blog, and she checked with Debbie) that I can use bubble bath base, which is great because I just got a bunch at Aussie Soap Supplies. I find it makes a great addition to a present basket (see further below) when you add a bit of pearliser, fragrance, and I always like to add a teeny bit of Shampoo Ultra Thick in there, to thicken the bubble bath.

I was at our local The Reject Shop earlier today looking for Easter trinkets (after seeing a doco on ABC or SBS called "Fakes" I don't want to buy chocolate at those places anymore - too afraid they are bad fakes, but I'm happy to buy their trinkets) and I came across these silicon moulds: 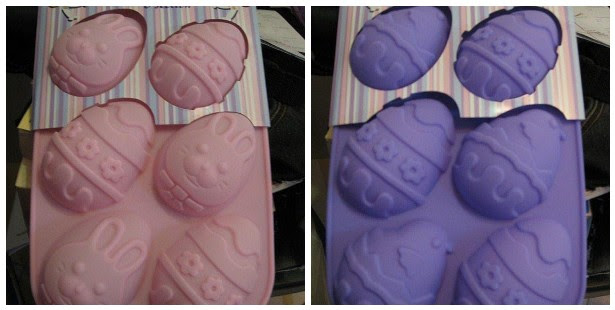 They had mini ones as well but I knew if I got the little ones I'd use them for chocolate and gobble them all up, so I dind't get them, but gosh they were cute!!

Speaking of gift baskets (well, I did mention it somewhat above when talking about bubble bath base)... This was the latest gift basket effort for a 21st. I made the labels using one of HeatherT's digi kits Little Miss Muffet. The theme was largely Strawberry based, but not all was coloured perfectly (the soap in the front is a loofah soap, and the mica I used wasn't quite strawberry red, but I try to play with what I have) but I tried to keep in the pink/red theme... I had to get some tea too when I saw that package, as it looked so luxurious!!

1. Ready for our first 21st, 2. 21st Birthday Basket, 3. 21st Birthday Basket wrapped up
and below are our henna tattoos. Mine was taken one day later, the girls' were taken as soon as they removed the henna. DD2 had a bit of a reaction to hers, it made her very itchy and they were both looking forward to removing them. I put lemon on mine after an hour or so but scraped it off before bed. Mine lasted just under a week, the girls's just over a week.

and finally I have unloaded pictures from my camera... and I present some of the Tie Dye that kept us busy during two very hot days over Christmas.

***
Well, this is what happens when you keep getting interrupted, things happen in the background the day ends, and I am now able to present you with little cup cakes, but you'll have to wait a bit for the chocolate egg soaps. 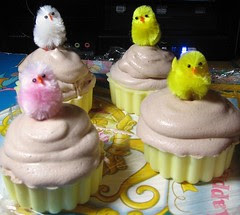 Hope you like them. I'm really happy with the way they turned out! Now to think of a clever tag or sticker so kids (who may win the raffle) don't take a big bite... this might be a problem :)
Time was: 00:41

Wow - you HAVE been busy and your soap cupcakes turned out awesome! And the 'leftover' easter soaps turned out cute too.

Wait, did I not comment on this already??? *lol*

Oh no, am I repeating myself? I think you're right Heather, I did post the pic of the tire earlier, but the fact the front one was about to do the same was quite frightening and may have made me forget the past ;)
I hope you're well! xx

So glad you're all safe. You look lovely! Those cupcake soaps are super cute.

I really like these cute soap cupcakes, my kids will surely enjoy doing this. thanks for sharing! :)