did you know that?
Jif, I think it's known in Canada as Vim (at least I think it was when I lived there!), removed the Pledge One Go from my pen...
How did I make this discovery? Well, today, I was not happy with the prospect of binning my pen just because it didn't work, so I tried removing the tip (I noticed somehow the supaglue/crazy glue I used wasn't that great and the eyelet could be rotated).
So I pulled, so you know the story (read yesterday's post to see what happened AGAIN!)... I tried removing the plastic bit with a tiny screwdriver, no go... then I thought "A drill bit!!!", well that worked fine (see, learn something new every day!). Messy, very messy, but it worked". I also now know that toothpaste is good to remove ink stains from white plastic vanities (we rent, so we don't have a say in what we get).
Finally got the plastic bit out, and today I bought some BIC pens! Sorry PaperMate, but Bic didn't let me down the last time I made a pen (following a Donna Kato Tutorial) and it won't let me down this time either (I HOPE!)...
OK, so the opening was a bit too small for the extra bit Bics have, so I drilled it out a bit to make it wider, and it fits fine, but it's a "short" pen, so I had to cut the ink well again! But my other pen didn't cause me any trouble.

There, my memory gets a bit blurry as to what I did... but I noticed that the operation I had to perform on the pen (again, read yesterday's missive) didn't quite work as I had anticipated!

*sigh* and *blerk* ... sooooo, I take the pen to the bathroom, tried to clean it with toothpaste (that's where I stained the sink with the ink, so used toothpaste and an old toothbrush, and it finally took the stain out, and I hope, no scratches!) but no dice, the ink stayed on the pen... so Jif came to mind, and that worked pretty darn well (also almost got rid of the stains on my hands!). Yay, clean pen, gaping wound running the risk of oozing more blue goop (aka: ink), almost clean hands! Dry the pen... and think of a solution to fil the gap! Then, I noticed, my pen wasn't shiny anymore... the cap was, but the bit of the cap where I had to scrub (oh yeah, stained THAT too) wasn't shiny either... ergo: jif removes pledge one go!

hmmm, and what will I do about the gap.
Well, the gap has been fixed with some super duper electrical tape -- so my pen now has a black band around it, where I had to cut it! Reminds me of my old pair of Doc Marten's when I was in college - my hippy/granola/"nature" period I guess -- held together by duct tape!!! The things we do when we're kids (I only did it cos other cool kids were doing it, well, kids which were cool in my eyes!).

Now I have to decide if I re-Pledge it, or not... I had to use tape, I did, because I had visions of that pen popping it's back end in my bag and the mess that would have made (not that my bag is not usually a mess, but you know, you try to prevent these things when you can!).

Well... other than that, I cleaned up some "will be earrings" bits (while I had the old toothbrush out) after sanding them. Got my pasta machine out of the garage (for a technique I can't wait to try) and I'm working tomorrow and Friday, hmm, school starts Monday *Evil Cackle* (Seriously, working during school holidays was a bit hard on this mum, and the holidays went by way too fast because of it!)

And here (eye candy) are some tiles I'm going to make into a necklace. I found an inspiring way to assemble them, now to find good jump rings that don't come apart! 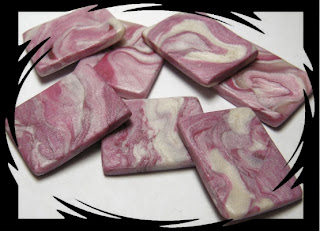 Hey France! good to see you're back at craft-land, lol. I love your polymer clay projects, and I look forward to see the finished necklace :)

I don't know why I said "necklace"! My fingers must've not been listening to my brain, it's a bracelet I wanted to make! and it's now finished, check out the post here!