With my Frangipani Mould from Krafty Lady

I made a skinner blend plug (I think it's called a plug, though it might be more of a bullseye cane, yeah, that's what it is! A bullseye cane!)

I cut a part of it which I reduced further, and cast them in the Frangipani Moulds 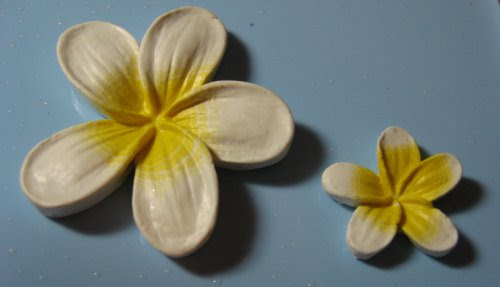 Yes, my skinner blend needs a bit of work, you can see rings, but it's good enough for me! Aren't they great? I'm thinking with yellow buna (if that exists) or even white or even black... (I'm not picky, I love black!) and the little frangipani either for earrings or as a toggle on the back!

Just oh-so-excited!!
For more ideas with the frangipani mould, have a looky here! And when these are baked and made into something, you'll see them there too!!!


Edited to add a nice picture of Frangipanis, found on the El Yunque National Forest site 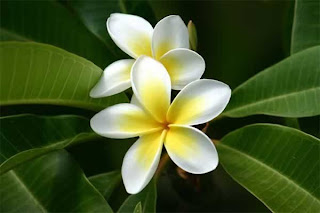 Ok, what's "frangipani" in this context? Just the name of those little flowers, or a different breed of mould?

I love that necklace you created--gorgeous! It *almost* makes me want to actually wear jewelry (laughing--I'm such a tomboy!)

Frangipanis are flowers
http://www.google.com/search?q=frangipani
they are gorgeous, they flower at least twice a year here, they come in all tones (I saw a picture of some really red ones yesterday) and they are just beautiful... I think they have them in Hawaii too. They are the kind of flowers, here, that make me realise where I am, and they make me smile too, I really like them (though the trees, when all the leaves fall, are butt-ugly!)
I'm going to try to embed a pic of one with my post now.

*boggle* The picture looks so graphic, it's hard to believe they're real!! GORGEOUS!! Thanks!

What a perfect use for your cane. Those flowers are beautiful and what a cool mold.

Lovely France...one of my fave flowers!
I cant wait to get my krafty lady moulds!!!