Yet more talk of Faux Ceramic and some eye candy

After scouring the web to find a "free source" for a technique similar to this tutorial I bought on ePattern Central, a few weeks ago, as a friend wanted to know the technique and I didn't feel too right sharing the paid-for-tutorial-in-a-pdf-with-a-password-even, two more posts about Faux Ceramic popped up on the blogosphere! I just had to post about THAT :) good things come in threes!! I guess.

Crafty Goat who links to Laura Griffin who credits Patricia Kimle for the original tutorial in Step by Step Beads magazine... well... Patricia Kimle is the author of the tutorial I bought on Pattern Central.com (Bright Light Beads)!!!


Today we went to Point Walter and saw up to 9 black swans at some point! Some were funny, they'd swim with one leg, having the other one sticking outside the water. The first one I saw like that, I thought had a broken leg, but then I saw three of them do it, then put their leg back in the water. Strange habit ;) I think I saw a dolphin fin too, but never saw it resurface... then again, maybe it was the Loch Ness monster *VBG* (I'm pretty sure I saw a dolphin's fin!) 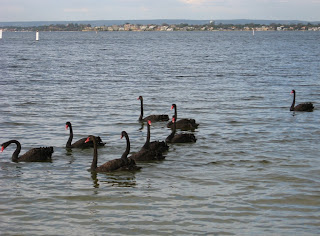 It was a beautiful day with a temperature of about 26°Celcius! Just so relaxing!!!

I uploaded a few new pieces on the Krafty Lady website:

------------------
Now I don't know if any of you got alerted to many new posts by me today, I'm sorry if you did. I decided to close my other blog (Stampamajiggies) where I planned on having tutorials, and place the posts here on this blog. This blog is such a mish mash of my whims and fancies that structure is the least of my problems, and then people don't have to go to two places. I still intend on updating (well, as up to date as it was about three years ago) the magazine index, to have it here on the blog as it's on a website that I don't even know if it exists anymore.... but that is SO different than what goes on here, that it's ok to keep it separated!
So they are all moved, all nine posts (as many as the black swans!) so this should be the end of mayhem! I hope :)
Time was: 20:04

Thanks for the link, France. And thanks for pointing out the Pattern Central site -- I hadn't come across it before. Those are pretty good prices for tutorials!